What was deemed as a start of a catastrophic war between the United States and Iran ended with Iranian’s taking to the streets and demanding the resignation of Supreme Leader Ali Khameini. The fiery protests are due to a series of incompetencies that led to the downing of a Ukrainian passenger jet and the killing of 176 people, 82 of which are Iranian nationals.

A complete 180-degree shift from a country uniting towards imposing “death to America” after the assassination of their revered military commander Qassem Soleimani, to another wave of aggressive protests after a revelation of betrayal and lies by their own government.

On January 8, Ukraine International Airlines Flight 752 took off from Imam Khomeini International Airport in Tehran at 06:12 local time (02:42 GMT). Less than 4 minutes after departure, the passenger plane crashed in a field outside Tehran, killing all 176 people on board.

The plane was a Boeing 737-800 – one of the international airline industry’s most widely used aircraft models. As the flight’s manifest was released, the victims were 82 Iranians, 63 Canadians, four Afghans, four Britons, three Germans and nine crew members from Ukraine.

As strong suspicions of the plane being shot down by an Iranian surface-to-air missile emerged, claims were immediately and vehemently denied at all levels of Iranian government with officials blaming engine failure and technical malfunction for the plane crash.

But heat-sensitive American satellites detected missiles fired from an Iranian air defense system towards the Ukrainian jet when it was about 8000 feet in the air.

And after mounting evidence surfaced contrary to the Iranian’s narrative, Iran’s military announced responsibility to the downing of the plane. It took days for the government to come clean on the negligence, and lying about the deaths of 176 innocent passengers triggered widespread anti-government protests within Iran. With brutal anti-government crackdowns, protesters were injured and killed.

What does the downing of Flight 752 mean forward?

The silver lining of this dark and tragic event is that it represents a break-off from the recent set of extremely dangerous escalations, which could have easily invited another devastating war to the middle-east.

The US asserts that Iran is backing down and as tension deescalates, Iran can claim it made the last strike. Looking back at the standoff, with all other factors aside, US President Donald Trump walked away with one objective completed — re-establishing deterrence.

Iran’s strategy to combating the US has taken a strong shift since the Obama era, this is directly due to Trump’s foreign tactics. One thing is clear, Trump has managed to establish and enforce a strong red line –the lives of fellow Americans.

As sporadic and unpredictable Trump’s behavior may seem with regards to Iran, the US president has been fairly consistent on his red lines and has demonstrated a willingness to enforce them.

On June 20, 2019 Iran downed a United States RQ-4A Global Hawk surveillance drone, one of the most advanced and expensive drones in the US arsenal (Costing $223,000,000, more expensive than the F-35 fighter jet), with a surface to air missile.

All of Trump’s military advisers pushed for a harsh military response but Trump called it off at the very last minute as he did not feel killing people was a fair response to destroying US military equipment.

….On Monday they shot down an unmanned drone flying in International Waters. We were cocked & loaded to retaliate last night on 3 different sights when I asked, how many will die. 150 people, sir, was the answer from a General. 10 minutes before the strike I stopped it, not….

Additionally, when Iran allegedly attacked Saudi oil fields on September 18, 2019, causing a spike in market prices and damaged five percent of the world’s oil supply, President Trump, once again, was pressured to respond forcefully. Yet, the same argument was made and the president showed military constraint.

However, that all changed on December 27, 2019 when Iranian backed forces killed a US contractor in Iraq. The US responded by assassinating Iran’s top general in Iraq, Qassam Soleimani.

Trump made it clear that harming any US citizens would bring the conflict to a place that Iran would be left with tough decisions.

The US had multiple opportunities to take out Soleimani, especially during the Obama era. Soleimani travelled freely within Lebanon, Iraq and Syria, often just miles from US posts. The general understanding was that assassinating him would create more problems than it would solve.

Now, Iran finds itself stuck between a rock and a hard place. On one hand, the country is enraged and not responding would show great weakness, setting a precedent for future US attacks and on the other, attacking US troops would welcome a conflict they cannot afford — politically, economically and militarily.

Iran’s decision was one of the compromises. Iran attacked two US bases, the Al-Asad base and a base in Erbil. However, they intentionally delivered notice of the attack to the Iraqi government, well aware that their targets would be forewarned. This way, they can maintain a strong posture, while avoiding crossing Trumps red line. 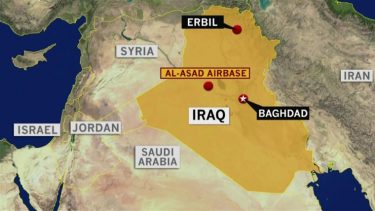 Change in political momentum for the US and Iranian tensions

For decades, the United States and western powers turned Iran into a Pariah state, enforcing crippling sanctions on the country.

During the Obama administration, the United States took a more diplomatic approach to dealing with Iran. World powers agreed to taper off sanctions in return for regulating Iran’s nuclear capabilities. This agreement was formalized as the JCPOA (Joint Comprehensive Plan of Action), or P5+1 (refers to the UN Security Council’s five permanent members; namely China, France, Russia, the United Kingdom, and the United States; plus Germany).

However, after President Trump assumed power, he reversed his approach to Iran and pulled out of the JCPOA. He called it, “the worst deal ever made,” snapping back the harshest of sanctions imposed on the Islamic Republic, with a new strategy of “Maximum Pressure”.

In response, the Iranian administration demonstrated strategic patience, well calculated posture and only lashed out with proxies reserving plausible deniability to any wrong-doings.

This allowed Iran to preserve the support of the remaining P5+1 members, diplomatically isolating the US states in their Maximum campaign strategy. So much so, that the European powers designed a Special Purpose Vehicle in an attempt to circumvent the US’ sanctions on the Islamic State.

However, the downing of the Ukrainian passenger jet might just serve as a turning point in regard to how the JCPOA will be handled forward.

Iran currently sees itself being squeezed on all fronts, their oil revenue is down more than 80 percent, inflation in the country is soaring, their proxy militias in Yemen, Iraq, Syria and Lebanon are not getting paid, and domestic unrest is growing frequent and aggressive.

One can argue that the White House’s maximum pressure campaign failed to bring Iran to the negotiating table, but it’s certainly posing a lethal threat to the Iranian government.

The Iranian hardliners have always opposed the JCPOA, and the moderate Rouhani government can no longer justify staying in it. They are forced to play the hand that the Americans want.

The Iranian government has just announced that it is now enriching uranium at a higher level than before the JCPOA agreement, thereby absolving all commitments forward. This can be seen as a direct provocation to the USA, but more importantly, to their European counterparts that refused to join in walking away from the agreement.

Then on January 14, the three Western European powers in the agreement –France, Germany, and the UK– formally complained that Iran was no longer abiding by its end of the bargain, saying they are left with no choice but to report Iran as not meeting its commitments under the JCPOA.

Iran is now losing their long-held European support, and western powers are starting to adopt a new strategy with Iran, one that Trump has been pushing for over 2 years.

So much so, we can see anti-government protesters would around the US and Israeli flagged on the floors of Tehran.

Now, further inflict pressure on the Islamic regime, violent protests erupt within the country’s capital and Iranians have expressed dismay to their tyrant leadership.

Furious Iranians took to the streets after being lied to from the truth behind Flight 752’s crash. More than the incompetence that surrounded the downing of the plane, Iran’s officials tried to hide from the people the real reason of the crash. Only when security footage and amateur videos of the crash came out that Iran’s government admitted responsibility to the incident.

People turned farther away from the government, and more sympathetic to the US’s rhetoric that the Iranian government cannot be trusted.

The demonstrations in Iran were not only participated by middle class citizens and students but also those lower-income Iranians in traditionally pro-regime areas. Even known personalities such as Iran’s actors, journalists and editors of pro-government news agencies denounced the government for misleading the media and the people, whom they considered slaves of the Islamic regime.

The US’ military budget in 2019 was recorded at an astounding 686 billion compared to Iran’s military budget of approximately $13 billion. Iran does not need to take on the US in a  military confrontation, they just need to make it appear as so. The country has a notorious reputation for exaggerating their military capabilities. This includes tampering with video footage of military drills and hosting mock presentation of aircraft fighters.

Now this is a time when Iranian defenses should be primed for American retaliation, a big blunder was witnessed. It does not reflect well on the Iran’s military competence.

However, this blunder reveals that their conventional military does not live up to the same standard.

The Iranian ground crew operating the Russian made TOR-M1 missile defense system, which shot down the Ukrainian passenger plane, should have easily identified that the target they locked onto was certainly not a military aircraft.

For starters, it was within the Imam Khomeini International Airport airspace, on top of the fact that the plane was  climbing at a speed of 250 knots and a rate of climb of about 2,500ft / minute, this is not the behavior of a missile or military aircraft, this is typical behavior of a civilian airliner.

Additionally, the transponder beacon that a civilian aircraft broadcasts was operating and should serve as another dead giveaway that this is not a threatening aircraft. The people monitoring this equipment were poorly trained.

On top of this, we have just learned that 2 missiles were shot at the civilian plane, with a 35 second delay. Indicating extremely poor oversight, correction control and chain of command.

Iran’s greatest fear was never the Americans invading, it’s their own people turning against them. They, more than anyone, understand what events a revolution could set forth. Iranian officials denied any responsibility for the downing of the plane with the type of boldness and confidence you would not expect from amateur liar and it’s this sort of behavior that can lose whatever trust they have left with their people, and certainly lends weight to their enemies.

Trump has found best artillery to win over this conflict with Iran. The US president has shown support to the grassroots revolutions and this is something the Iranian government fears the most. As they know very well, revolutions are the greatest threat to topple their corrupt government.