On Sunday, over 78 civilians were killed as the military continued its crackdown against peaceful protesters, marking it as the deadliest day since the coup. 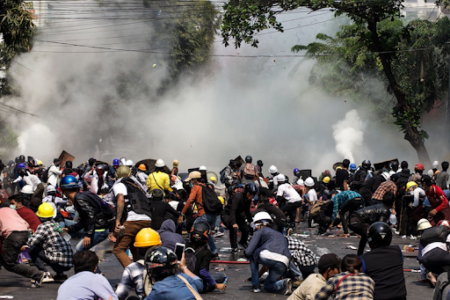 Most of the fatalities came from the industrial suburb of Yangon where the military officials opened fire against the unarmed civilians. At least 22 individuals were killed including a 15-year old girl. Advocacy groups even described the scene as “a battlefield” with social media footage showing protesters hiding behind handmade shields and makeshift barriers.

At the same time, several Chinese-owned factories were burned down in the garment-producing area. However, neither the protesters nor the military took responsibility for the fire.

Monday also saw another round of violence as 20 more individuals were killed. As tension continued to escalate, the military placed Yangon as well as five more townships under martial law.

The situation had grown increasingly dire since the military took over on February 1. According to the local monitoring group, Assistance Association for Political Prisoners (AAPP), a total of 2,100 individuals were detained by the junta some of which were activists, journalists, government officials. Humanitarian organizations also raised concerns about the junta’s nighttime raids.

The city held a mass funeral as grieving parents bid goodbye to their loved ones. One of those who were killed was Khant Nyar, a medical student. In a social media video, his mother cried, “Let them kill me right now, let them kill me instead of my son because I can’t take it anymore.”

Political experts also feared that martial law might sideline humanitarian rights. According to Melissa Crouch, a Myanmar law expert, “The use of martial law is extremely troubling and … represents a significant decline in the situation in Myanmar.” Individuals who were sentenced by a military tribunal can face three years of hard labor.

The incident also led to an exodus of people who fled the city. On Tuesday, thousands of civilians, most of which were migrant workers, left Yangon aboard flatbed trucks and “tuk-tuks” causing a major traffic jam. The news outlet, the Democratic Voice of Burma noted, “We can see the people on the roads for as far as one’s eye can see.”

International organizations have also raised the alarm on Myanmar’s political situation. U.N Secretary-General, António Guterres, condemned the junta’s action, “The military is attempting to overturn the results of a democratic election and is brutally repressing peaceful protesters.”

The U.S. also called other countries to take action. State Department spokesperson Jalina Porter said, “The junta has responded to call for the restoration of democracy in Burma with bullets.”

Jeymar Layogan
Jeymar E. Layogan was born in Nueva Vizcaya, a hidden gem province of Region II in the beautiful country of the Philippines. Jeymar always loved hearing other people's stories and viewing the world through other's interpretations. This love for people led Jeymar to study Health Sciences and receive his license as a Radiologic Technologist. Through this professional, Jeymar was able to connect to others. But, he felt a calling for something more. Something or someplace where he could dive into the stories of others and find a way to share the truth he uncovered. Jeymar says that it's as if journalism found him and not the other way around. Jeymar is now a full-time Journalist at Peres Daily News, Israel Now, and Breaking 9 to 5. Jeymar is especially passionate about sifting facts from fiction through countless hours of research and keeping up with Western politics.